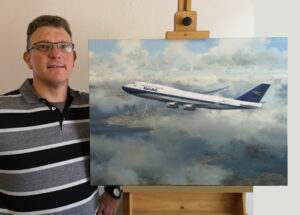 The aviation art of Darryl Legg, has been circulating South Africa for the past 20 years and has attracted clients both locally and internationally. His interest in aircraft, together with his passion for art, inspired Darryl at an early age, to pursue his talents and to emerge as one of South Africa's leading aviation artists. On completing his training, he became a full time professional artist at the age of twenty, choosing acrylics as his medium. Although his subject matter includes portraits, landscapes, automotive, locomotive and marine art, Darryl is a recognised Aviation Artist, and the majority of his time is devoted to working on aviation commission work. Painting as a full-time professional, it is indeed a full-time career, requiring many hours of research and detail applied to each portrayal of his aviation subject, with emphasis on colour accuracy and realism.

Each of Darryl's works, is done on a gesso-primed canvas. Acrylics are his choice of medium, as this paint has fast-drying qualities, which compliment his style and enables him to attain a high level of detail. With hundreds of aviation books, magazines and photographs in his library, Darryl can create works which are accurate and authentic, relying on his reference to ensure that each artwork is in line with his high quality standard which he maintains for each client.

On two occasions, Sun International has commissioned Darryl to do marine paintings, which hang in the main games room of the Grand West Casino in Cape Town. Other corporate clients include the South African Airways (SAA)and the South African Air Force (SAAF) for whom he has done numerous works over the years. In 2008 Darryl exhibited at the Warbirds over Wanaka Airshow in New Zealand. It was a spectacular event where his work was well received and it boosted his international clientele. Recently, Darryl was approached by the Natures Choice food company, to paint and create a ‘3D’effect of a fictional airliner on the factory wall. An image of this can be viewed on the ‘other’ category under galleries.

Darryl Legg was born in Cape Town, South Africa in 1975. After having matriculated in 1993, he went to the Technical College in Port Elizabeth, where he completed his art course. He is currently living in the Karoo town of Middelburg, from where he sends his work to various clients, both locally and internationally.

SAPIART Publications are proud of the work Darryl has done for us. This British Airways 747-436 is added to a ever increasing exciting range of airliner aviation art that  capture the romance of air travel.

John Young has long been regarded as one of the world’s leading aviation artists. His paintings combine a truthful representation of technical subjects with sensitivity to the many moods of the sky, land and sea indeed; his landscapes are treasures in their own right. For fifty years he has painted a rich pageant of colour and atmosphere which surround aeroplanes. His first contact with flying machines came from the famous Cobham’s Flying Circus and spent his school days under the skies filled with planes of the Second World War. He then went to art school and did national service with the Royal Air Force. A lifetime of skill shows through with all his work which hangs proudly next to works of David Shepherd and Frank Wooton.

Ronald Wong has arrived at his career in Art via a devious route indeed. A scientist by training, Ronald specialized in biochemistry for his degree in Britain. After some years working in the Health Service in London, he made the decision to pursue his childhood interest in art and since 1976 has been a professional artist. Although his strength in recent years has without doubt been in the very specialized realm of aviation, his first artistic forays were into areas no less challenging -- portraiture, animals and wildlife, and landscapes.

Aviation had made an indelible impression when growing up close to the flight path in Hong Kong, and when he joined the Guild of Aviation Artists in Britain his work quickly began to attract attention and win prizes. An additional boost in those early years was the special interest and appreciation shown by overseas Air Forces, in particular the United States Air Force, with which he continues to have a close association and cooperate in artistic projects. The vast majority of his work are specially commissioned "from source" -- directly from airmen -- in which his aim is to achieve not only technical accuracy but to capture the unique atmosphere and dynamism of different flight scenarios, no less than the realism and vitality imparted to his wildlife work. Today his aviation work encompasses not only air forces of diverse nationalities but airline and aerospace companies and important galleries.

Ronald continues to be one of the most successful independent artists, which, with his wide-ranging interests, suits him particularly well. He is also a member of the American Society of Aviation Artists and the Guild of Motoring Artists. He lives with his family in Hertfordshire, not far from London, where he has his new, expanded studio.

Tony is a Graduate of Brighton Art College with a First Class honors degree in Design. He spent over a decade in Design and Architecture becoming a Director in a large London/New York based Architectural and Design Practice. He turned to full time Illustration and Painting in 1989. A one-time Chairman of The Guild of Aviation Artists of which he is a Full Member and Medal holder. Tony is also a Member of the Chartered Society of Designers and a Fellow of the Society of Architectural llustrators.
He has won over a dozen awards for Aviation Painting both in the UK and USA. Tony’s work, almost entirely to commission, has wide ranging subject matter and has involved extensive travel worldwide; indeed much of the reference for the backgrounds on the illustrations for SAPI Airliner Prints has been from the numerous photographs he has taken (and sketches he has made) whilst flying. He has flown in over 40 types of aircraft both military and civilian (including most of the types depicted in SAPI prints).

Over the last 10 years he has been involved with many commissions for the British Army involving visits to various Exercise locations, Peace Keeping and War Zones including Iraq as a War Artist in 2003. 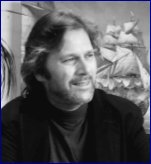 Richard was born in Hove Sussex and at the age of just six months he started his long association with ships. First he crossed the Atlantic by Liner, moved from the USA to Barbados and onto Singapore where he began sailing at a very early age. When he was 11 years old the family took the slow route by cargo ship back to the UK. Whilst growing up he spent many happy hours on the water in the varied boats his father owned and as a family they spent nearly all their summer holidays yachting. An activity he still enjoys today.

A graduate of Brighton College of Art and Design he left with a First (1.1) degree. After spending over a decade in Design and Architecture he became a full time artist in 1989. Mostly working for Architectural, Aviation and Military clients he has also done much work in the off shore Oil and Gas Exploration sector. He has had many maritime painting commissions including book illustration and exhibited several times with the Royal Society of Marine Artists in London.